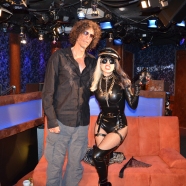 Two radio icons came face-to-face in one of the best interviews the best interviewer in the world has ever done – Howard Stern spoke with Lady Gaga for almost 90 minutes Monday.  Gaga also sang live with just a piano, officially making me a “Little Monster,” aka “fan.”

After the show, Twitter and the internet buzzed with feedback from many listeners saying they were not fans of Lady Gaga [too gay] but the interview and performance blew them away.  The HowardTV video of her first performance (below) was so popular, it froze up the YouTube page for a few minutes when it was posted Tuesday afternoon.

Listen for yourself to the performances below.  You are dead inside if you don’t feel something!

“When he was my age, my dad was into Bruce and having sex under the boardwalk in Asbury Park,” Gaga shared with Stern while discussing the influence her family has on her music.  “As I was growing up performing, he saw himself in me and got scared!”

“My first piano teacher was also a stripper at Scores… I always wondered why her nails were so long despite playing the piano,” she shared after revealing she began playing the piano on the family’s upright when she was four years old.

“I told my dad that burlesque is the performance art of the future… when he was upset at coming to one of my performances downtown after I moved out on my own,” she continued while talking about her family’s reaction to her day-job before becoming famous.

“This song is about my Grandfather and also knowing in your heart that you may never reach that glorious moment before you die so live life on the edge… and let’s all dance in the middle,” she shared before performing “Edge of Glory.” (video below)

“Wow-wee that was beautiful,” said Howard Stern after the performance. “I am in love with you.  I want to marry you.  I was moved. That was one of the best live performance I have ever had in all the years I have been doing this so thank you for that.”

Then they spoke for a few minutes and Lady Gaga began her second song, “Hair”…

“Why is it I want to cry every time she sings?” said host Robin Quivers when Lady Gaga finished singing.

“Beautiful,” Stern whispered, as they continued on with the interview.

Howard’s interview on SiriusXM repeats intermittantly tomorrow (Friday, July 22) and all weekend on channels 100 and 101.