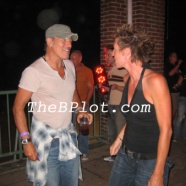 Originally published October 15, 2009, TheBPlot and The Coaster story about Bruce Springsteen’s visit to town quickly went national.  Outlets like the New York Post, Gawker, KTLA Morning News and a bunch of fan sites picked it up – one columnist called it the “greatest Bruce headline ever.”  A new Crush party – each one sells out – is scheduled for Saturday, Sept. 6 at the Paramount Theater: 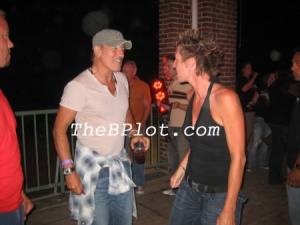 October 15, 2009:  Mostly unnoticed, Bruce Springsteen stopped by August’s Crush “party for women” at the Beach Bar – chatting and joking with the more than 500 partying ladies.

“He walked up to the ticket table and we told him he was welcome, of course, however he had to be an honorary lesbian for the evening,” said a smiling Jill Potter, producer of the event.  “Bruce threw out his arm for a wristband and went right in.  It was fantastic.”

“Bruce was so great – a total fun gentleman,” said Potter.  “A few days later one of his employees called me to thank me on behalf of Bruce and gave me two tickets to his Friday concert at Giants Stadium.”

The next Crush party is planned for early 2010.  AwwMama.com will have more information.

Got a celebrity tip?  Email: Richard@TheBPlot.com