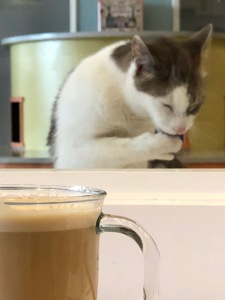 Catsbury Park’s Cat Convention at Convention Hall helped build awareness about cat adoption and raised thousands for rescue organizations. Pictured is Skylar, who is waiting for her forever home at the cat cafe on Cookman Avenue.

Originally published in The Coaster May 3, 2018…

The recent cat convention in Asbury Park brought more than 5000 feline fans together and raised $60,000 for shelter cats, making it the largest convention of its kind on the east coast.

“Catsbury Park Cat Convention brought thousands of people from every state you can think of to our city by the sea to celebrate all things cat,” said DJ Bornschein, co-organizer of the convention and founder of Catsbury Park cat cafe.  “In doing so, we were able to raise money for charities that are doing so much good in New Jersey.”

The event at Convention Hall featured a packed two-day program which included meet-and-greets with some of social media’s most prominent cat stars and “who rescued whom” stories of cats and their owners.

Directly, the event raised $40,000 which will be distributed to six area nonprofits for the care of cats waiting for their forever homes, including the Brodie Fund which helps cats fighting cancer and the Asbury Park Boardwalk Cat Sanctuary.  An additional $20,000 was raised by satellite charities that hosted booths at the event.

The convention was conceived of and managed by former music tour managers, Bornschein and Jamie Nichols.  Together they have 50 years worth of experience in entertainment production.

“CatCon in Pasadena, California is the only bigger event than what we saw in Asbury Park,” said Nichols, who is also manager of the cat cafe.  “The feedback from our inaugural convention, the largest on the east coast, was overwhelmingly positive.  We are already planning a bigger program for 2019.”

Catsbury Park’s cat cafe and free-range shelter has placed 165 cats in their forever homes since its founding eight months ago.