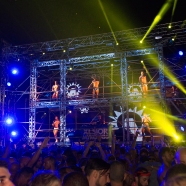 ASCENSION DANCE FESTIVAL COMING THIS WEEKEND (AUG. 4 TO 6): THE DETAILS YOU WANT…

More than 1000 people are expected when the Ascension Dance Festival touches down for the first time in Asbury Park this weekend.

Founded 12 years ago in Fire Island by Eric Von Kuersteiner, event producer, Ascension has grown into one of the Top 40 GLBTQ dance festivals in the world.  After two years in Mykonos, Greece the festival chose Asbury Park as the location to return to the US. 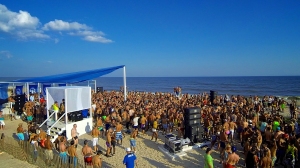 Revelers at a previous Ascension party in Fire Island. More than 10 dance-focused events are planned in and around the Asbury Hotel. The big dance party will be held outside in Atlantic Square Park on Saturday (Aug. 5).

All festival events will be based in and around the Asbury Hotel.  In total, there will be 11 Ascension events featuring 14 DJ’s.  Billboard Top 100 Dance recording artist and runner-up on “America’s Got Talent” Season 11 Brian Crum is also scheduled to perform at Saturday’s beach dance party in Atlantic Square Park.

“We have booked every one of the most world-renowned GLBTQ DJ’s including DJ Paulo, Dani Tori and Eddie Martinez to be at Ascension in Asbury Park, plus a few surprises,” said Von Kuersteiner.  “The music, combined with the beautiful scenery and ocean air will make for a weekend of memories.”

Guests can purchase individual event tickets or weekend passes, which range from $39 to $10,000.  Tickets to Saturday’s main dance party start at $119.  The $5,000 and $10,000 weekend “Super Passes” include entry for 10 or 20 people, private cabanas with dedicated bartenders, express lines, and much more.

Tickets are still available.  As of last month, the event was 70% sold out.

Billboard Top 100 Dance recording artist and runner-up on “America’s Got Talent” Season 11 Brian Crum is scheduled to perform at Saturday’s beach dance party (1 to 8 pm) in Atlantic Square Park (across 5th Avenue from the Asbury Hotel).

“Everyone who loves to dance and have a good time is welcome at Ascension,” said Von Kuersteiner.  “The festival was originally created years ago for the GLBTQ community but we want everyone to feel welcome.  We can’t wait for the opportunity to showcase The city to many of the people from around the world who have told me that they have never been.”

Ascension is the sole fundraising event, run by volunteers, for Fund in the Sun Foundation a non-profit based in New York.

“Over the past decade we have granted more than $1.2 million to primarily grass-roots charities with little fundraising muscle but big proven results,” said Von Kuersteiner, who also serves as chairman of the foundation.  “Charities like Camp Heartland where we have sponsored more than 1000 kids with HIV or AIDS to go to summer camp.”

The foundation has also supported charities like Live Out Loud, and the Hetrick-Martin Foundation. Von Kuersteiner continued, “100% of the net proceeds from Ascension are designated for charities.  All the foundation-specific expenses are paid for privately.”

“We came up with the name Ascension for our weekend dance festival because the event is about bringing people together, elevating spirits and celebrating life,” said Von Kuersteiner.  “It’s become one of the Top 40 GLBTQ dance festivals in the world thanks to everyone involved – from DJ’s to the event producers – doing it the best way possible, ultimately to benefit charities.  We are beyond excited to bring this good-energy event to Asbury Park this year.”

For tickets or more information about Ascension (Aug. 4 to 6), visit AscensionParty.com.